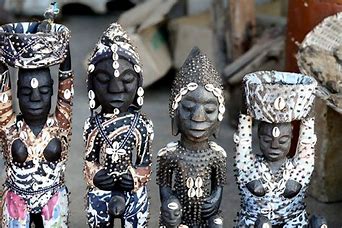 VOODOO is the general name given to the African religion originally practised along the West African Coast across to Central Africa. Despite the name ‘Voodoo’ [npr.org] having come from the Fon people of southern Benin in West Africa meaning ‘spiritual entity’, It has become a buzzword which seems to have been picked up and generally used by the early visitors to that region, who were followed by early writers on African religion. It is worth noting that a number of major tribes along the West African region use names like Vodun (by a tribe in Benin), vodzu (by the Ewe tribe whose settlements span across Ghana, Togo and Benin). However, all these are localised names pointing to traditional religion.

African Slaves are said to have brought their indigenous religion along with them to plantations in Brazil, Haiti, Cuba, the United States of America (Louisiana), the Caribbean islands and wherever they were taken to settle. Even after the four hundred years since the end of the slave trade, the traditional religion remains an important part of the spiritual life and belief system along the indigenous regions in Africa as well as the slave settlements where the religion has ever been introduced.

If we consider the African traditional religion as the worship of a ‘spiritual entity’, then the traditional religion is very widely practised even among the townships and communities with large groups of people being part of Christian communities. Benin may have a great majority of its population being openly voodoo worshipers, but across the whole of West Africa through to Central Africa huge numbers of people secretly engage in various forms of traditional worship and consultation. A Haitian professor, Leslie Desmangles, was right when he aptly referred to Voodoo as “a whole assortment of cultural elements: personal creeds and practices, including an elaborate system of folk medical practices; a system of ethics transmitted across generations [including] proverbs, stories, songs, and folklore… voudon is more than belief; it is a way of life.” While some of the Ewe cultures have almost every household having a deity that is worshiped, there are fetish shrines among every tribe across the whole region. These fetish shrines perform very important functions for the townships as a whole and offer consultations to individuals. In Ghana, for instance, the planning and celebration of annual festivals in several townships are purely traditional and therefore directed by traditionalists and fetish priests. It is not surprising that the leadership of a considerable number of the modern churches are said to use powers from deities in their (so called Christian) church worship and healing sessions.

It will be very misleading to attempt to launch a discussion on Discrimination against Voodoo worshipers and practitioners in the African regions. In Benin, for instance, where a greater part of the population are voodoo worshipers one would expect discrimination against Christians. An interesting pattern can be observed and experienced among the Ewe traditional communities along the West African region. These are the communities with shrines of the family deity in almost every household. (except for families which have converted to Christianity over a long period of time). These generally have a situation where Traditional worshipers outnumber worshipers of other religions. Part of some family members who have converted to the Christian religion discriminate against those of their family members who are still voodoo worshipers; the Christians refuse, for instance, to assist their family members (still in the voodoo worship) with financial support irrespective of however urgent the situation might be. Some (non-Christian) chiefs, when confronted with having to resolve disputes between a Christian party and a party which still practices the traditional religion, often discriminate against the party who are Christians. Other chiefs with sympathies for the Christian religion would not exhibit such discriminatory attitude. Apart from family shrines in the households, there are also so-called powerful shrines that serve the community at large and are also consulted by individuals from anywhere on the globe irrespective of their faith. These powerful shrines can be found not only in Benin and among the Ewe communities but could be found anywhere in the townships and villages of the African region. People from all walks of life consult these shrines depending on how powerful they are, or what their area of dedication is. Such shrines have become more of centres consulted for medicinal and healing purposes than worship centres some of these are also consulted by Head pastors for power to run their churches. Strangely some of these pastors who consult other powers and are running ‘mega’ churches are still accepted by their followers if their problems get solved.

It can be concluded from the foregoing situation analysis that voodoo worshipers, or followers of traditional religion are generally not discriminated against within the society. Even though Christian worship has become sort of fashionable among people of communities, non-Christians are generally not discriminated against in home and community issues. It is true, however, that young individuals seeking partners for marriage tend to get concerned when their intended marriage partners indicate not belonging to any of the known religions. This is often resolved by getting the partner to start attending church meeting or promise to do so in the future. If traditional beliefs and worship is still ‘’a way of life’’, as long as the shrines perform important functions (spiritual and medicinal) any discrimination may be from either side, and will be based on views and experiences of individuals and their relationship with their counterparts.